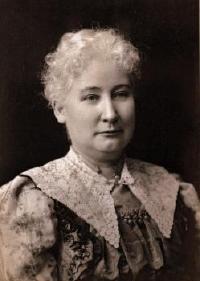 May Wright Sewall
May Wright. Teacher and feminist. She was born on 27 May 1844 in Greenfield, Milwaukee County, Wisconsin.1,2 She was the daughter of Philander Montague Wright and Mary Weeks Brackett.1 May Wright married firstly Edwin W. Thompson in 1872. May Wright married secondly Theodore Lovett Sewall, son of Edmund Quincy Sewall and Louisa Kilham Lovett, on 30 October 1880 in Indianapolis.1 May Wright died on 22 July 1920 in Indianapolis at the age of 763 and was buried on 26 July 1920 in Crown Hill Cemetery, Indianapolis, Marion County, Indiana.4
Miss Wright graduated from the Northwestern University, Evanston, Illinois., A.B., 1866, A.M., 1868. She taught in Plainwell, Michigan, being the first woman superintendent of the graded schools of a town in that state, and subsequently devoted herself to the promotion of the higher education of women and the woman suffrage movement. She became principal of the Girls' Classical school, founded by her husband in Indianapolis, Indiana, 1882; and in 1891-92, traveled extensively in Europe in the interests of the Congress of Representative Women at the Columbian exposition, 1893, of which, as the president of the National Council of Women of the United States of America, she was the organizer. She was chairman of the executive committee of the National Woman Suffrage association, 1882-89; member of the Indiana commission in the board of World's Fair commissioners, 1892-93; president of the National Council of Women, 1891-95 and again, 1896-99, and in 1899 was made honorary president. She was president of the International Council of Women, 1899-1904, and was sent as a delegate to the Universal Congress of Women in Paris, 1889, where she delivered addresses in French; to Halifax, N.S., 1897; to Ottawa, Canada, 1898; to London, 1897 and 1898, and to The Hague, 1898.

She was a U.S. commissioner to the Paris exposition, 1900, and to the various congresses held during the same year. She was also officially connected with many literary, historical, artistic, and reform organizations at home and abroad; organized the Annual Peace Demonstration by Women of the United States in 1899, and originated the New Internationalism. She is the author of several books, pamphlets and monographs, and became widely known as a lecturer and contributor to current periodicals.1

Phillip Green Wright was born on 3 October 1861 in Boston, Massachusetts.2 He was the son of John Seward Wright and Mary Clark Green.3 Phillip Green Wright married Elizabeth Quincy Sewall, daughter of Joseph Sewall Sewall and Mary Vashon Wright, on 7 February 1889 in Medford, Massachusetts.2 Phillip Green Wright died on 4 September 1934 at the age of 72.4
Philip Green Wright, noted economist and former member of the Advisory Board of the Tariff Commission and of the staff of Brookings Institution. died yesterday at Garfield after an illness of several months. He was in his seventy-third year.
Dr. Wright, who made his home at Forest Olen, Md., joined the Tariff Commission in 1917, and five years later went to Brookings. He retired in 1939. Since then, he has done research work for the institute of Pacific Relations, and last year made a study for the Duke Foundation of the effect of inflation on handling of endowment funds.
He was for years a prolific writer on economic subjects and more recently had studied extensively the problems growing out of the depression. in connection with this, publishing a pamphlet on unemployment - "Outcasts of efficiency." Dr. Wright also published several volumes of poems, and aside from these labors found time to cultivate a flower garden at his home that is one of the show places of the suburbs. He served as president of the Capitol View Citizens' Association. He also was a member of the Cosmos Club.
Wright was born in Boston, the grandson of Elizur Wright, who often is called "the father of life insurance in the United States" by reason of the improvements he obtained in life insurance laws.
His early education was received in Tufts College, and then followed a year in Harvard from which he received his master's degree in 1885. Afterward Dr. Wright taught economics and mathematics at Lombard College. Galesburg. Ill., which conferred upon him the degree of LL.D. in 1930.
In 1889 Dr. Wright married Elizabeth Quincy Sewall of St. Paul who, with three sons, survives him. They are Sewall Wright, professor of genetics at the University of Chicago; Quincy Wright, professor of international law at the same institution, and Theodore Wright, manager of the Curtiss Aircraft Corp. at Buffalo. Evening Star, 5 September 1934.4

Of San Jose, California.2 Robert Wright was born on 5 June 1925 in District of Columbia.3 He was the son of Professor Sewall Green Wright and Louise Lane Williams.1 Robert Wright married an unknown person.1 He died on 16 January 1997 in Santa Clara, California, at the age of 71.3

Rosalind Wright was born on 11 October 1923 in Chicago, Cook County, Illinois.2,3 She was the daughter of Professor Philip Quincy Wright and Louise Maxey Leonard.1 Rosalind Wright graduated from Bryn Mawr College. She married Michael Marcus-Myers Harris on 8 March 1946. Rosalind Wright died on 15 April 2021 in Brunswick, Cumberland County, Maine, at the age of 97.
Rosalind Wright Harris, 97, died peacefully in her home in Brunswick on April 15, 2021, with her children Alison and Peter, by her side. At the end, her mind was as sharp as ever and her spirit unbowed; only her body failed her as she battled Multiple Myeloma.
Rosalind was born Oct. 11, 1923 in Chicago, Ill. to Louise Leonard Wright and Quincy Wright. Her father was a founder of the discipline of International Law and a professor at the University of Chicago. Her mother was on the national board of the League of Women Voters and served as director of two international organizations in Chicago. Rosalind graduated the University of Chicago Laboratory Schools. While there, studied for a year at the International School in Geneva, Switzerland. In 1943, she graduated from Bryn Mawr College and joined the U.S. State Department in Washington in the Public Liaison Division.
In 1945, she was a member of the six-person State Department team sent to San Francisco to organize the international conference that resulted in the creation of the United Nations. There she met Michael Marcus-Myers Harris, an architect with Harrison and Abramovitz in New York City. He joined the team to design meeting spaces for the conference. They married in Chicago in 1946 and moved to New York City. Their daughter, Alison, was born in 1947, and their son, Peter Quincy, was born a year later.
After the State Department, Rosalind worked for the Woodrow Wilson Foundation, the International Graphic Arts Society, and the American Labor Education Service. Later, she was the administrator of the Kenworthy Swift Foundation that makes grants in support of children’s mental health. She served as their administrator for 25 years until she left New York City for Maine in 2015.
Starting in the late 1950s, she became involved with many international organizations. In 1958, she joined the board of the American branch of the International Social Service. Later, she served as president of ISS-USA and on the executive committee of the international ISS organization. She was ISS’s representative to the United Nations from 1966 to 2015. She was on the executive committee for the group of non-governmental organizations (NGOs) associated with the UN, generally known as CONGO, and served twice – 19 years apart – as CONGO’s president. As president, she was instrumental in developing the model for international NGO forums held in parallel with major UN conferences, starting with the 1974 Population forum in Bucharest. Subsequently, she helped plan and run four forums focused on women in Mexico City, Copenhagen, Nairobi and Beijing, and others on Habitat (Vancouver) and on Drug Abuse and Trafficking (Vienna). She was a board member and president of the NGO Committee on UNICEF; a founder of the International Women’s Tribune Center that emerged from the 1975 women’s forum in Mexico City; a member of the UN Advisory Committee for the Unitarian-Universalist Association and other international organizations involved with child welfare, crime and drug trafficking, and women’s education and economic development. For eight years, she was president of her building’s co-op board.
In the meantime, Michael Harris became a partner in Harrison and Abramovitz and served as assistant planning director for the UN Headquarters in New York and oversaw its construction. Later, he was partner-in-charge for the design of the Dag Hammarskjöld Library at the UN; the UN Children’s School; four new buildings at Rockefeller Center; and many other significant projects in New York City and elsewhere.
Throughout Alison’s and Peter’s childhood Rosalind spent every summer with them at her parents’ summer home in Thetford, Vt., far away from the bustle of New York City. In the city and in the country, she was an exceptional cook and gracious hostess, as well as a talented seamstress, knitter and needleworker. She was an avid reader and addicted to solving New York Times crossword puzzles. Her New York City home was always open to visitors – family, friends, and friends of friends from abroad or from her children’s circles as they moved from school age to young adulthood. In 2015, after 56 years in the same apartment on 67th Street, she moved to Thornton Oaks in Brunswick.
In Maine, she was member of the Friends of Bowdoin, People Plus, the Camden Conference and the Topsham Garden Club. Until the pandemic, she regularly attended concerts and theater in Brunswick and Portland, lectures at Bowdoin College, the annual Camden Conference on international affairs, the World Affairs Conversation Group at People Plus, as well as many activities on the Thornton Oaks campus.
Rosalind was predeceased by her husband, Michael M. Harris, who died in 1982; and her brother, Christopher Wright. She is survived by her daughter, Alison Harris (Bernard Breitbart); her son, Peter Quincy Harris; her nephew and niece, Malcolm Morehead Wright and Diana Sewall Wright; three grandchildren, Michael Quincy Harris, Benjamin Parker Harris, and Margot Harris Dillon; and seven great-grandchildren, Piper, Jacob, Abigail, Elias, Quincy, James and Isaac.4

Russell Allen Wylie was born on 27 March 1904 in New York.2,3 He married Harriet Maxine Sewall, daughter of Samuel Egbert Sewall and Mabel Caroline Johnson, in 1928 in Medford, Massachusetts.1 Russell Allen Wylie died in April 1985 in New York at the age of 813 and is buried in Memory Gardens Cemetery and Memorial Park, Colonie, Albany County, New York.4

Joanna Charlotte Wyman was born on 12 June 1935 in Boston, Massachusetts.1,2 She married Richard Lang Sewall, son of Dr. Weston Fullerton Sewall and Ruth R. Lang, in 1955 in Monroe, Florida.3 Joanna Charlotte Wyman died on 13 January 2012 in Pembroke, Massachusetts, at the age of 761 and is buried in Center Cemetery, Pembroke, Plymouth County, Massachusetts.4
Joanna C. (Wyman) Sewall, age 76, of Pembroke, died at her home, Friday, Jan. 13, 2012.
Born in Boston, Joanna lived her entire life in Pembroke, growing up on West Elm St., before moving to her home on Center St. She was an active member of the First Church of Pembroke for many years and worked at the Pembroke Post Office for many years as a mail carrier. Joanna loved spending time with her family and cats. She also enjoyed gardening. Joanna was the beloved wife of the late Richard Sewall; devoted mother of James Richard Sewall and his wife Carol of MD, William Lang Sewall of Plymouth, Barbara Ann Reed and her husband William of Pembroke, Harold Dean Sewall and his wife Kim of CA and Ericjohn Sewall and his wife Sherri of Pembroke; loving grandmother of Philip, Julia, John, Chad, Jenna, Joanne, Greg, Lucas, Emily and great-grandmother of Hayley and Daylen; dear sister of William "Ritchie" Wyman of Pembroke and John H. Wyman of Boston. Calling hours at the Shepherd Funeral Home, 7 Mattakeesett St., (Rte. 14), Pembroke, Monday, Jan. 16, from 4-8 p. m. Her funeral service will be held at the First Church of Pembroke, 105 Center St., Pembroke, Tuesday, Jan. 17 at 9:30 a. m. Interment will follow at the Center Cemetery, Pembroke.5

M, #8352, b. 4 November 1836
Pedigree
Of West Lodge, somewhere in Dorset; afterwards of Keswick, York County, Ontario and later of Gleichen, Alberta. He was Lt. Colonel 12th York Rangers, served in the North-West, 1885 as second in command of Midland Provisional Battalion. Alfred Wyndham was born on 4 November 1836.1 He married Caroline Elizabeth Stuart, daughter of John Stuart and Elizabeth Van Rensselaer Powell, on 1 June 1859 in Toronto, Ontario.2