Sidney N. Sewall was possibly born say 1845 N.B. This hypothetical relationship is based entirely upon an unsupported burial record.1 He was the son of Henry Foster Sewall and Sarah Allyne Rich.1 Sidney N. Sewall died in September 18471 and is buried in Green-Wood Cemetery, Brooklyn, Kings (Brooklyn)County, New York.1

Simon Merrill Sewall is also recorded as Merrill Sewall. He was born on 14 July 1820 in Edgecomb, Maine.1 He was the son of Rufus King Sewall and Phoebe W. Merrill.2 Simon Merrill Sewall appears on the census of 1850 at Edgecomb, Lincoln County, Maine, listed as a mariner.3 He married Mary Wilson Sanford Mitchell, daughter of John S. Mitchell and Philenia Sewall, on 2 August 1854 in Gardiner, Kennebec County.4 Simon Merrill Sewall died on 12 October 1895 in Dorchester, Massachusetts, at the age of 75 on his way to his southern home in Beaufort, South Carolina. He died of fatty degeneration of the heart. The report in the Boston Daily Advertiser says that he died at the home of his niece, Mrs. Jean de Peiffer5,6 and was buried in Oak Grove Cemetery, Gardiner, Maine.7

Somers Sewall was born on 14 June 1843 in Mobile, Alabama.1 He was the son of Kiah Bayley Sewall and Lucretia Day.1 Somers Sewall died on 7 December 1867 in Portland, Maine, at the age of 24.2 He was buried in Evergreen Cemetery, Portland, Cumberland County, Maine.3

Sophia Sewall was the daughter of Major Nicholas Sewall and Susanna Burgess.1 On 13 November 1738 Sophia inherited from her father 1,000 acres of land on the Choptank River called Lady's Gift or Sewall's Range, of which she and her husband sold half. Sophia Sewall married John Cooke.1 Sophia Sewall and John Cooke was living in Graiden, Prince George's County, Maryland.2

Stanley Darke Sewall was born on 11 September 1939 in York, Maine.2 He was the son of George Norman Sewall and Bertine Margaret Darke.1 Stanley Darke Sewall died on 3 July 2022 in York, Maine, at the age of 82.3
Stanley D Sewall, husband, father, grandfather, brother, uncle, friend and avid Red Sox fan passed away July 3, 2022 at the age of 82 after a prolonged illness. Stanley was born September 11, 1939 in York, Maine. He graduated from York High School in 1957 having lettered in baseball, basketball, cross country and football. He was quite an accomplished athlete in High School, even competing in a statewide basketball tournament, finishing third in the free throw event. And more than once his name was lauded in the local paper for his skill as a tailback and ‘star of the game’ in football. Later in life he used his knowledge and love of sports to coach baseball for his son and help his somewhat less enthusiastic daughters to play.
He went on from high school to attended Maine Maritime Academy, graduating in 1960 with a Bachelor of Marine Science. This education led to him accepting a job on cargo ships and sailing all around the world - he often referred to his ‘trips to the orient’ and his family still has some of the wonderful items he brought home from his travels abroad. On a blind date in 1962 he met his future bride Diane A. Blethen. They married May 25, 1963 and went on to have five children and live in 6 houses in 5 states over the next 59 years. After the excitement of sailing around the world once he got married he settled down and he began his career in Gypsum, manufacturing wallboard for National Gypsum, Georgia Pacific and LaFarge over the years. He and wife Diane also built up a respectable business in antiques and collectibles and traveled the states going to glass and Antique shows together as well as having a shop in Red Hook, NY.
Stanley was loved by all who knew him - people loved him for his kindness, fairness and wonderful sense of humor. He loved a good laugh and was always quick to tell a joke. He was always ready and willing to help. His wife and children will be forever grateful to him for his patience, guidance, and unconditional love. We will miss his wonderful laugh and bright blue eyes.
Stanley is survived by his wife Diane Sewall née Blethen, his five children, Mallory O’Shea of Poughkeepsie, NY, Jennifer (Sewall) and husband Philip Elwyn of Atlanta, Georgia, Mary (Sewall) and husband Stephen Berkel of Houston, TX, Jeremy and wife Lisa Sewall of Wellesley, MA and Amanda (Sewall) and husband Mark Holstein of Sheffield, MA as well as his brothers George Ellsworth and wife Paula Sewall and Michael and wife Roberta Dow, both of York, ME. He was the proud Grampy (‘P’) to 13 grandchildren and 2 great-grandchildren. He was the son of George N Sewall and Bertie Dow née Darke, who both preceded him in death. He was also preceded in death by his stepmother Ethel “Babe” Sewall née Chapman and his step father Charles Dow.2 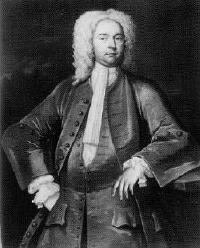 Stephen Sewell (1702-1760)
Stephen Sewall was born on 14 December 1702 in Salem.1 He was the son of Major Stephen Sewall and Margaret Mitchell. Stephen Sewall was baptised on 20 December 1702 by Rev. W. Noyes.2 He graduated in 1721 from Harvard.1 He died on 10 September 1760 in at his residence, Boston, at the age of 57 "dies estate insolvent"; "died bankrupt, probably through involvement in his brother's (Jonathan) speculations" according to a letter written by President John Adams.3

Sewall Stephen, son of Stephen Sewall, esq. was born in Salem, in December, 1702. He was graduated at Harvard College, 1721, and then took the charge of a school at Marblehead. The office of a grammar master ought to be accounted honourable. It is the most useful employment, and some of the greatest men in this country have thus begun their publick course. Mr. Sewall was chosen tutor in 1628, and continued in that office till the year 1739, when he was elevated to a seat on the bench of judges. His character was very eminent as a scholar. Dr. Chauncy, who was his classmate, and whose judgement none will dispute, speaks of him, as a man of first rate talents. "Quickness of apprehension," says he, "and a capacity to look thoroughly into a subject, were united to him in the highest degree I ever saw in any of my acquaintance. One could scarcely begin to mention a train of thought, but he would at once perceive the whole of what was going to be said ; and if it was a disputable point, had in readiness what was proper to be said in answer." He studied divinity, and was an excellent preacher, but did not incline to settle in the ministry. Having turned his attention to law, his wisdom and knowledge were so conspicuous, that he was recommended by the first gentlemen of the profession, as the most proper person for a vacant place of the superior court. Judge Dudley was then chief justice; and, upon his death, he was appointed his successor, though he was not the senior of the surviving judges. His reputation was high when he first went upon the bench, but in this superior station he gained more applause. " He preserved a great decorum in the court. He moderated the debates with a becoming calmness and dignity, in conjunction with a strict impartiality; shewing himself at once the man of honour and spirit, the knowing lawyer, and upright judge.
This great and good man was taken off in the midst of his usefulness. The powers of his mind were in full vigour ; as a judge, he was held in admiration, and one of the most learned and useful members of his majesty's council. To this office he was elected when he was chief justice. He would have been chosen some years before, but could not be persuaded to accept the place. He departed this life, Sept. 10, 1760, aged 58.
No one's death ever excited a more general sympathy. He was as much beloved for his good qualities, as admired for his superior wisdom. His polite and elegant manners gave a charm to the virtues of his life. It was remembered, likewise, how much he had dispersed and given to the poor! He was so kind to his relations and friends, and all who applied to him for help, "that he outdid his proper capacity." Two orphan children of his brother, Mitchel Sewall, esq. were under his immediate care. It was his intention to give them every advantage of education. The loss to them was irreparable.
Judge Sewall died a bachelor. He was a member of Dr. Mayhew's church. The Dr. printed the sermon he preached after his death, which may appear too much in the strain of eulogy ; but he observes, that the memory of wise and just men ought to be praised with all ardour of expression. "It seems but just and equitable," the Dr. adds, "that he, who never spoke evil of any one, but honoured all men, and delighted to give all their due share of praise, should, at least, when he is dead and gone, be praised by all in his turn; and so much the rather because he would not willingly suffer any to commend him while living, which was the truth concerning this excellent person." Eliot: Biographical Dictionary of New England, p. 420.4

Stephen Sewall was born on 19 January 1684 in Newbury, Massachusetts.2 He was the son of John Sewall and Hannah Fessenden.1 Stephen Sewall died young.

Stephen Sewall. Of York, later a merchant in Bath, Maine.2 He was born on 5 September 1764 in York, Maine.3 He was the son of Capt. Moses Sewall and Miriam Stone.1,3 Stephen Sewall married Abigail Bartlett, daughter of John Heard Bartlett and Dorcas Moulton, on 21 April 1788 in Second Parish Church, Kittery, York County, Maine.2 Stephen Sewall died on 28 March 1796 in Bath, Maine, at the age of 314 and is buried in Dummer Street Cemetery, Bath, Sagadahoc County, Maine.5

Stephen Sewall was born on 30 December 1767.2 He was the son of Professor Stephen Sewall and Rebecca Wigglesworth.1 Stephen Sewall died on 26 December 17681 and is buried in the Old Burying Ground, Cambridge, Middlesex County, Massachusetts. His gravestone gives his age "XI months and 26 days."2

Stephen Sewall. Printer and publisher. He was born on 1 January 1775 in Haverhill, New Hampshire.1 He was the son of Jonathan Mitchell Sewall and Sarah Wood.2 Stephen Sewall drowned on 24 October 1824 in Taunton, Massachusetts, at the age of 49.1

Stephen Sewall was born on 14 December 1760 in Georgetown, Sagadahoc County, Maine.2 He was the son of William Sewall and Sarah Chisam.1