George Edmund Sewell was born on 2 February 1879.1 He was the son of Edmund William Leveson Sewell and Mary Elizabeth Angelica Hall. George Edmund Sewell was born on 8 May 1879 by George V. Houseman, Rector of Quebec.2 He died on 30 December 1881 in Québec "aged two years and eleven months."3 He was buried on 31 December 1881 in Mount Hermon, plot 725.4

Geraldine Eva Constance Sewell was born on 8 February 1909 in Québec.2 She was the daughter of Charles Albert Sewell and Eva Jane Ross.1 Geraldine Eva Constance Sewell was born on 6 May 1909 in Québec Charles Ross and Mary Evelyn Ross were the sponsors.2 She died on 3 March 1993 in St. Brigid's Home, Sillery, Québec, at the age of 84 unmarried.3,4 She was buried on 19 March 1993 in Mount Hermon Cemetery, plot 374.1

Geraldine May Sewell was born on 19 November 1830 in Québec.1 She was the daughter of Sheriff William Smith Sewell and Mary Isabella Smith.2 Geraldine May Sewell was baptised on 25 January 1831 at Québec.1 She married Colonel Thomas Bromhead Butt, son of Rev. Thomas Butt and Catherine Bromhead, on 14 July 1852 in Trinity Chapel, Québec, Canada, the service was conducted by the Rev. E.W. Sewell.3,4 Geraldine May Sewell appeared in the 1881 census at Anerley Park, Penge, Surrey. With three of her daughters and three domestic staff.5 She died on 30 April 1898 in London at the age of 67. Her last address was 33 Gloucester Street, Belgrave Road. Her daughter Margaret Lucy Butt was administratrix.6

Children of Geraldine May Sewell and Colonel Thomas Bromhead Butt

Geraldine W. Sewell is also recorded as Angelo Louise Sewell which is the name that appears on the registration of her birth but cannot be found on any subsequent record.2 She was born on 23 November 1888 in Toronto, Ontario.3 She was the daughter of Stephen St. Albans Sewell and Clara Priscilla Lepper.1 Geraldine W. Sewell died on 7 March 1924 in General Hospital, Toronto, at the age of 35 of thyroid toxaemia.1

Gertrude Sewell was born on 2 August 1833 in Québec.3 She was the daughter of Sheriff William Smith Sewell and Mary Isabella Smith.1 Gertrude Sewell was baptised on 18 September 1833 at Québec.3 Gertrude's death was registered in the quarter ending December 1859 in the Dartford, Kent, registration district; she died unmarried.4

Gertrude Sewell was born in December 1851 in Sorel, Province of Québec.1,2 She was the daughter of Dr. Edward Quincy Sewell and Susan Wilson Haydon.1 Gertrude Sewell died on 8 May 1927 in the Homeopathic Hospital, Montréal, at the age of 75.3,1 She was buried on 10 May 1927 in Mount Royal Cemetery, Montréal.3,1

Gladys Hope Sewell was born on 24 September 1892 in Belleville, Ontario.2 She was the daughter of Reginald Lambton Sewell and Clara Ann Henderson.1 In April 1915 she signed her attestation papers to serve as a nurse with the Canadian Over-Seas Expeditionary Force. Gladys Hope Sewell married Dr. James Wells Ross O.B.E., son of James F.W. Ross and Adelaide M. Gooderham, on 25 August 1915 in St. John's Church, World's End, Chelsea.3 Gladys Hope Sewell died on 3 February 1933 in St. Michael's Hospital, Toronto, at the age of 40 of peritonitis.4 She was buried on 6 February 1933 from 133 Dunvegan Road, internment at St. James Cemetery.4

Harold Edmund Sewell. A broker.1 He was born on 12 January 1864 in Toronto, Ontario.2,3 He was the son of Robert Shore Milnes Sewell and Louisa F. Wicksteed.4 Harold Edmund Sewell married Katherina Frederika Schallhorn, daughter of Christopher Schallhorn and Christina Jaerke, on 25 November 1896 at 209 University Street, York, Ontario, the groom was of the Church of England and the bride of the German Lutheran Church.1 Harold Edmund Sewell died on 1 July 1909 in Coleman, Nipissing, Ontario, at the age of 45.5

Harold McDonald Sewell was born on 20 November 1891 in Toronto, Ontario, Canada.2 He was the son of Stephen St. Albans Sewell and Clara Priscilla Lepper.3 His attestation paper dated on 11 July 1916 show him as a draughtsman living at home with his mother at 96 Spencer Avenue, Toronto.4 Harold McDonald Sewell died in 1977.3

Helen Westerine Sewell was born on 14 June 1908 in Perth, Ontario.1 She was the daughter of Colin James Sewell and Robina Buchan Blackburn.1

Henrietta Eliza Sewell was born on 14 October 1808 in Québec City.1 She was the daughter of Chief Justice Jonathan/3 Sewell and Henrietta Smith. Henrietta Eliza Sewell was baptised on 23 November 1808 at Québec.1 She married Rev. Dr. Francis James Lundy D.C.L., son of Rev. Francis Lundy M.A. and Agnes Elizabeth Rudd, on 11 May 1837 in Chapel of the Holy Trinity, Québec, the service being conducted by the Rev. E. W. Sewell. in the notice of marriage the groom is described as being of University College, Oxford. In the copy of the registration of the marriage he is described as Head Master of the Classical School at Quebec.2,3,4 Henrietta Eliza Sewell died on 17 November 1847 in Dr. Melville's house, Niagra-on-the-Lake, Lincoln County, Ontario, at the age of 39 of puerperal fever.5 She was buried on 19 November 1847 in St. Mark's churchyard, Niagara-on-the-Lake. In the east corner of the church there is a tablet: "Sacred to the memory of Henrietta Eliza Sewell, wife of F. J. Lundy, B. C. L., assistant minister of this parish, and daughter of the Hon. Jonathan Sewell, D. C. L., late Chief justice of Lower Canada, died 1847, aged 39."6

Henry Arthur Sewell is recorded as Arthur Sewell in the 1911 Census.2 He was born on 19 April 1897 in Lake St. Joseph, Portneuf County, Québec.3,1 He was the son of Charles Albert Sewell and Eva Jane Ross.4 Henry Arthur Sewell was baptised on 30 May 1897 at Chapel of the Holy Trinity, Québec.3 By in October 1916 he had served for three years in the 8th R.R., eleven months in the 42nd Bn. C.E.F. and four months in the 17th Bn. C.E.F. by which time he had been commissioned as a Lieutenant. He married Grace Violet Douglas, daughter of Thomas Luke Douglas, on 19 July 1921 in St. Mathew's Church, Québec.5 Henry Arthur Sewell died on 27 March 1983 in St. Catherines at the age of 85.4

He was educated at Dr. Murray's School in Kent and at Queen's College, London. He served his articles under the late Sir Joseph Bassilgate of London, England, famous sewage and irrigation engineer. Later, on completion of his articles, he received an appointment from the Nizam of Hydrabad as engineer in charge of that district. After 8 years' service he was forced to resign owing to ill health. Returning to England he entered the employ of the Metropolitan board of works as Divisional Engineer and on Jan. 13th, 1880, was appointed Associate member of the Institute of Civil Engineers.

Later coming to Canada he received his Dominion Land Surveyor's commission in 1884, followed by his Ontario Land Surveyor's in 1885. He entered private practice at Port Arthur, later moving to Rat Portage (now Kenora).

He did extensive government work in the Rainy River and Lake of the Woods' district including numerous townships and Sewell's base line in 1888 extending from longitude 91° to 92° in latitude 48 degrees 15 minutes and the meridian line extending south from Lake Conmee to Bass Wood Lake. He also surveyed several townships in Saskatchewan and Alberta.

He entered private practice at Toronto in 1903, which he carried on until his retirement in 1916.

Henry de Quincy Sewell was born on 18 September 1845 in The Parsonage, Hadlow, Kent.2 He was baptised on 19 September 1845 at Hadlow, Kent.3,4 He was the son of Rev. Henry Doyle Sewell M.A. and Elizabeth Charlotte Monypenny.1 Henry de Quincy Sewell's birth was registered in the quarter ending September 1845 in the Tonbridge registration district.5 He died on 25 March 1846 in Hadlow Parsonage, Tunbridge, at 7:40 in the morning. The child had been blind from birth and died from some malformation or water on the brain. He was buried on 31 March 1846 in Hadlow, Kent.6 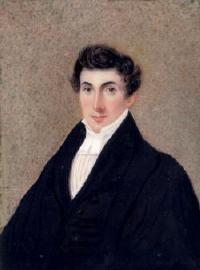 Inscription on the reverse of the picture of Henry Doyle Sewell

Rev. Henry Doyle Sewell, 1863
Rev. Henry Doyle Sewell M.A. was born on 21 October 1806 in Québec City.1 He was the son of Chief Justice Jonathan/3 Sewell and Henrietta Smith. Rev. Henry Doyle Sewell M.A. was baptised on 12 November 1806 at Holy Trinity Church, Québec, by the Rev. Salter Jehosaphat Mountain. Godparents included Janet Plenderleath and Colonel William Doyle.1 He graduated on 31 May 1828 from Trinity College, Oxford, BA, and MA on 9th June 1831.2,3 Between 1844 and 1848 he was Curate at Hadlow, Kent. From 1848 to 1850 he was Chaplain to the Embassy at Constantinople then, until his death he was the Vicar of Headcorn. The Act Book of the Archbishop of Canterbury noting his permission to officiate in the Province of Canterbury records him as having been in 1843 chaplain to the Bishop of Montreal. He married firstly Elizabeth Charlotte Monypenny, daughter of Robert Monypenny and Elizabeth Dunn, on 25 October 1844 at Hadlow, Kent, the marriage was conducted by the Rev. James Isaac Monypenny, Vicar of Hadlow and first cousin of the bride.4 Rev. Henry Doyle Sewell M.A. and Edith Pierce Morganappear in the 1871 census, she is listed as governess to Charlotte Sewell, who was aged nineteen at the time.5 Rev. Henry Doyle Sewell M.A. married secondly Edith Pierce Morgan, daughter of Robert William Morgan and Jane Beale Bleaden Pierce, on 9 September 1871 in St. Andrew's Church, Watford, Hertfordshire.6 Rev. Henry Doyle Sewell M.A. and Edith Pierce Morgan appear in the 1881 census which also lists Charlotte, a daughter of Henry's first marriage and the five children of this marriage living in the vicarage. Additionally Mary A. Evans, aged 28, was nursery governess; Lydia Lamkin, 33, was nurse and Alice Stock, 21, was cook.7 Rev. Henry Doyle Sewell M.A. died on 19 March 1886 in Headcorn, Kent, at the age of 79.8,9
"On Friday afternoon the interment of the late vicar (the Rev. H.D. Sewell) took place at Chantry Chapel [Headcorn], where the grave bad been dug by permission of the Archbishop of Canterbury. The mournful procession left the vicarage at a quarter to three, and the coffin was followed, in addition to the relatives of the deceased, by a large number of parishioners and friends, including Dr. Tuke, Dr. Warren, Messrs, J.H. Grant, A.E. Stuart, G. Homewood, G. Oyler, G. Oyler, jun., T.H. Oyler, Keener, and W. Coveney (churchwardens), J. Hosmar, T. Jones, G. Knight, O. Ellis, T. Gibson, J.Tassell, &c. The cortege was met at the churchyard gates by the following clergy, the Rev. Dr. Reyner, rector of Staplehurst ; the Rev. E.J. Selwyn, rector of Pluckley; the Rev. Joseph Lanphier, rector of Ulcomb; the Rev. J. McLachlan, rector of Sevington ; the Rev. Amos, curate of Headcorn; the Rev. W. Peterson, rector of Biddenden; the Rev. Mercer, vicar of Egerton, &c. On entering the church the Dead March was played by Mr. R.J. Theakstone. The coffin was covered with beautiful wreaths and crosses. The service at the graveside was read in a most impressive manner by the Rev. Joseph Lanphier, and after the congregation passed before the grave to take a last look at the resting place of their pastor. The coffin was of massive oak with brass fittings, and bore on a brass plate the following inscription:- "The Rev. Henry Doyle Sewell, Vicar of Headcorn, died March 19th, 1886; aged 79." The funeral arrangements were conducted by Messrs. Chaplin and Wills."
The funeral sermon of the Rev. Henry Doyle Sewell setting forth the doctrines of grace was preached by request. This was printed by Shaw & Co. of Ashford.10
The will (dated Feb. 3, 1885) of the Rev. Henry Doyle Sewell, late of Headcorn. Kent, who died on March 19 last, was proved on the 17th ult. by Mrs. Edith Sewell, the widow, the Rev. Frederick Arthur Cecil Lillingston, and Edward Newman Knocker, the executors, the value of the personal estate exceeding £20,000. The testator bequeaths £2250 to his wife, in addition to the provision made for her by settlement: £15,000, upon trust, for his wife, and, after her decease or marriage again, for his five children by her ; £3000 to, or upon trust for, each of his children, Henry De Quincey, Sewallis Arthur, and Charlotte Mary; and a legacy to his executor Mr. Lillingston. There are also some specific bequests to his wife and children. As to the residue of his real and personal estate. he leaves one moiety, upon trust, for his wife and his children by her; and the other moiety to his three children before named.11,12