George Vail Shepard Michaelis was born on 9 January 1908 in Garden City, New York.1 He was the son of George V.S. Michaelis and Harriet Manley.1

Henry Sewall Michaelis was born on 20 September 1906 in New York City.1 He was the son of George V.S. Michaelis and Harriet Manley.1

Child of Amanda Mick and Willis B. Pettitt 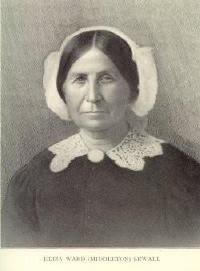 M, #10230, b. 4 September 1755
Pedigree
Samuel Ward Middleton was born on 4 September 1755 in Charles County, Maryland.2 He married Catherine Taliaferro Hooe circa 1790.1,3
The Middletons were thrifty, prudent people, and Samuel Ward, who spent his entire life on a plantation in Charles County, was no exception to the rule. He was fortunate in the possession of a wife who had excellent executive ability, and who was skilled above the average in the accomplishments of her day. Among other things she was credited with being able to knit in one day one of the long stockings worn by the men of that time, the stitches so arranged as to spell his name, and the day, month and year of his birth.2

Barbara Mildram was born on 28 November 1915 in Newtonville, Massachusetts.1,2 She was the daughter of Frank Clement Mildram and Louise Weston Sewall.1 Barbara Mildram died on 21 February 2014 in Farmington, Maine, at the age of 98.3
FARMINGTON -- Barbara Mildram Thompson died on Friday, Feb. 21, 2014, in Farmington.
Barbara was born in Newton, Mass., on Nov. 28, 1915, the daughter of Frank and Louise Mildram. She graduated from Newton High School and then Vassar College.
Barbara enjoyed a long and devoted career in Early Childhood Education as a teacher, administrator, and college professor starting in New Mexico, then Washington, D.C., New York City, New York state, and eventually Providence College.
From 1960-1968, Barbara worked with nursery schools, kindergartens, and day care centers to help oversee the first years of Head Start in New York state.
She was an athlete, and was an early advocate for women's sports, including lacrosse. She was proud to have competed on a women's American field hockey team for a tour oversees. She was a President of the Boston Field Hockey Association.
Barbara loved traveling the world and taking lots of pictures. She was up for adventure throughout her whole life.
At retirement, she came to Maine, the birthplace of her ancestors. Living in Falmouth, she worked diligently on documenting the Mildram, Sewall and Weston genealogies. This included traveling to dozens of New England cemeteries and gathering records from town halls. This 300 page document was reproduced and proudly given to family members and genealogical societies in Maine.
Barbara was independent, with many friends. This changed when she was bitten by love, and married for the first time at the age of 87, to the Rev. William Thompson, also of Falmouth. His family lovingly embraced her.
For over 20 years, she faithfully volunteered weekly at the Maine Historical Society until she was about 90. She read one or two newspapers a day.
Among the scores of people whose lives she touched, Barbara is survived by Cynthia Mildram Foster of Maine, Janice Mildram of Maine, Douglas S. Mildram of Massachusetts, Stephen Mildram Holton of Connecticut, David K. Holton of Colorado, Doug and Gail Thompson of Portland, and all their families.
Barbara chose to have no memorial service.3

John Mildram was born on 3 November 1911 in Newtonville, Massachusetts.2 He was the son of Frank Clement Mildram and Louise Weston Sewall.1 John Mildram died on 25 June 2002 in Waban, Middlesex County, Massachusetts, at the age of 90.3