M, #5370, b. circa 1592, d. 24 February 1672/73
Pedigree
John Howland was born circa 1592 in Fenstanton, Huntingdonshire.1 He was the son of Henry Howland and Anne (Unknown).1 John Howland emigrated in 1620 came to Plymouth on the 1620 Mayflower as a servant to John Carver. After the death of Carver, he rose rapidly as a leader in the colony. In 1627 he was the head of one of the twelve companies which divided the livestock, and he was one of the eight Plymouth Undertakers who assumed responsibility for the colony's debt to the Adventurers in return for certain monopoly trade privileges. He was on the 1633 freeman list, and by 1633, if not earlier, was an Assistant, being re-elected to this position in 1634 and 1635 . In 1634 he was in charge of the colony trading outpost on the Kennebec River when Talbot and Hocking were killed. He received a good number of land grants, was elected a deputy for Plymouth, served on numerous special committees, and was an important lay leader of the Plymouth Church. The Reverend John Cotton related how at his own ordination as pastor of the church in 1669 "the aged mr John Howland was appointed by the chh to Joyne in imposition of hands." He married Elizabeth Tilley, daughter of John Tilley and Joan Hurst, on 25 March 1623.2 John Howland made a will on 29 May 1672 names ten children.3 He died on 24 February 1672/73 in near Plymouth, Massachusetts.1

Ida Maria Hoyt was born on 1 April 1857 in Hudson, Wisconsin.1,2,3 She was the daughter of Dr. Otis Hoyt and Eliza Bellows King.1 Ida Maria Hoyt graduated in 1879 from University of Wisconsin B.S.3 She married Edmund Devereux Sewall, son of Edmund Quincy Sewall and Louisa Kilham Lovett, on 10 October 1888 in New Richmond, Wisconsin.4 Ida Maria Hoyt died on 25 October 1943 in Hennepin County, Minnesota, at the age of 86.5 She was buried in Lakewood Cemetery, Minneapolis, Hennepin County, Minnesota.6 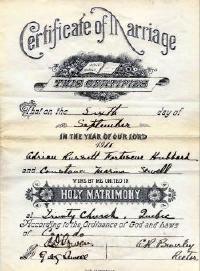 Dr. Adrian Russell Fortescue Hubbard MRCS, LRCP was born on 10 February 1878 in Ramsgate, Kent, though apparently not registered. He was the son of William Alexander Hubbard and Catherine Eliza Susannah Gordon St. Aubyn.1 Dr. Adrian Russell Fortescue Hubbard MRCS, LRCP married Constance Marina Sewell, daughter of Alexander W. Sewell and Jane Elizabeth Helen Oliver, on 6 September 1911 in Holy Trinity Church, Québec.2 Dr. Adrian Russell Fortescue Hubbard MRCS, LRCP died on 15 March 1974 in Québec City at the age of 96.3
MAJOR ADRIAN RUSSELL FORTESCUE HUBBARD, M.D. Representative of a distinguished English family, accomplished in medical lore and with a long practical experience in his profession, Dr. Adrian Hubbard, of the City of Quebec, has established himself firmly and reputably as a practitioner here. Although favoured beyond most populous centers with a high grade of professional representation, Quebec is nevertheless fortunate in the possession of such outstanding citizens as he. His record before coming to Canada to make his home was notable in its achievements and comprehensive in its scope, while his work in Quebec has brought him to the favourable attention of the populace and been the source of a large number of satisfied patients, while his brother practitioners hold him in the highest esteem and admiring regard. He has a multitude of friends and is a valuable citizen to this Province and to the Dominion.
Adrian Russell Fortescue Hubbard was born at Ramsgate, Isle of Thanet, Kent County, England, February 10, 1878, a son of William Alexander Hubbard, who was town clerk of Ramsgate for more than thirty years, and Catharine Eliza Gordon (St. Aubyn) Hubbard, she being a daughter of Major St. Aubyn and a grand-daughter of Sir John St. Aubyn of Michaels Mount. He acquired his early education at St. George's College, Ramsgate, and finished his professional studies at Charing Cross Hospital Medical College. In 1902 he became a member of the Royal College of Surgeons and a licentiate of the Royal College of Physicians, later passed the Primary Fellowship examination in the Royal College of Surgeons. In 1902 he was also house surgeon of the Charing Cross Hospital and in 1903 house physician of the same institution. During his period at Charing Cross he was a member and secretary of the Hospital football team that played successfully up to the semi-finals in the Hospital Rugby Football cup matches. His work at this hospital was followed by his service as medical officer of the St. John's Wood Free Dispensary, in London, where he remained until the latter part of 1904, when he went to Manchester as assistant to Dr. G.A. Pinder. Here he continued until 1910 and in the following year came to Canada and located in Quebec. Here he established an independent practice and quite soon was appointed assistant surgeon at the Jeffery Hale Hospital and then made surgeon of that institution. In 1912 he volunteered in the Canadian Medical Corps and was commissioned a captain in 1913. In the following year he became a member of the Medical Staff of the Military Hospital of Quebec and in 1917 was promoted to major and placed in charge of the Military Hospital here. In November, 1917, he was a member of the first relief train's complement from the Royal Medical Corps to rush to Halifax, Nova Scotia, where he was in charge of the victims of the explosion who were cared for by the Emergency Hospital, organized under the auspices of the Young Men's Christian Association. In 1918 he became medical director of the Soldier Civil Reestablishment district of Quebec, in which capacity he served for two years. He is a Fellow of the American College of Surgeons, with which he has been affiliated since 1920. He is past secretary of St. John Ambulance Association and a member of the Quebec Garrison Club; Kiwanis Club, of which he has been a director; Victoria Curling, Quebec Snowshoe and Colbert Fish and Game clubs. His religion is that of the Church of England.
Adrian Russell Fortescue Hubbard married Constance Marina Sewell, daughter of Alexander Sewell, a son of the Rev. Edmond Sewell and grandson of the late Jonathan Sewell, Chief Justice of Quebec. They are the parents of a son: Sewell Fortescue Hubbard. The family residence is maintained at No. 14 Cook Street, Quebec. The Storied Province of Quebec, Vol. III, p. 185.

Carrie-Ann Stephanie Hubbard was born on 24 August 1991.1 She was the daughter of William Adrian Hubbard and Laureen Ann Mallon.1