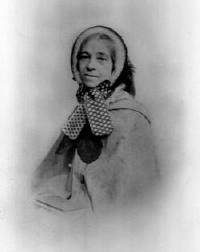 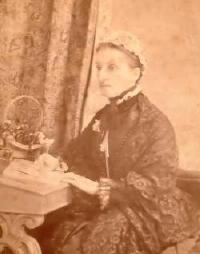 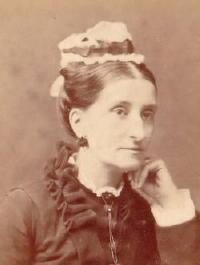 Zébée Stewart Gordon
as a widow

She married Dr. William Bell, son of William Bell and Markie Minto, on 22 October 1850 in St. George's Church, Montréal, Canada, the service was conducted by the Rev. William Bond. Zébée Stewart Gordon died on 5 July 1901 at 7 Woburn Road, Bedford, at the age of 74 after a very short illness4 and is buried in Bedford Cemetery.

Rev. Clement Hammond Gosset M.A. was appointed in 1860, rector of Langton Herring and vicar of Fleet, Dorset. He and Lucinde Elizabeth Symonds appear on the census of 4 April 1881 at Langton Herring Rectory House, Langton Herring, Dorset, together with their son, two boarders, Septimus S.W. Smith and William H. Andrews (both described as students for holy orders); Mary Trevett, aged 15, of Abbotsbury was the general servant at the house.3 Rev. Clement Hammond Gosset M.A. died on 22 September 1897 at the age of 70 and this was registered in the in Weymouth, Dorset, District.4,6

Children of John Gough of Oldfallings and Margaret Wedgwood

Child of John Gough of Oldfallings and Bridget Astley

F, #13275, b. 11 March 1868, d. 1953
Pedigree
Alice Bache Gould was born on 11 March 1868 in Lynn, Massachusetts.2 She was the daughter of Benjamin Apthorp Gould and Mary Apthorp Quincy.1 Alice Bache Gould died in 1953 in Simancas, Spain.1
Mathematician and historian.
As a young child she lived with her family in Cordoba, Argentina where her father was the head of the Argentine National Observatory. Alice returned to Cambridge in 1871 to live with relatives while her family stayed in Argentina. In 1885 she began her education at the Society for the Collegiate Instruction of Women in Cambridge (later Radcliffe College). She then attended Bryn Mawr College from 1886-1889, where she received her A.B. in mathematics and physics as a member of the school's second graduating class. She continued her study of mathematics at the Massachusetts Institute of Technology and Newham College in England from 1890-1893.
Upon her return from England, Alice taught mathematics for a year at Carleton College in Northfield, Minnesota and began her graduate studies at the University of Chicago in 1894. She received a fellowship from the University in 1895 for her PhD thesis on Brodian geometry under the guidance of mathematician E. H. Moore. The death of her father on Thanksgiving 1896 and the loss of her fellowship in 1897 put a strain Alice's health and she returned to Cambridge, Mass. before completing her thesis.
In 1897 Alice established an endowment at the Academy of Science in her father's name. She spent the next several years looking for work and occasionally lecturing on mathematics. She attempted to complete her studies in Chicago but returned to Cambridge to recover from poor health. In 1900 she began research for her monograph on Louis Agassiz which was published by her cousin-in-law Mark A. De Wolfe Howe in 1901 as part of the Beacon Biographies of Eminent Americans series. In 1903 Alice traveled to Puerto Rico to recover from the flu and from 1905-1907 was instrumental in establishing the "Porto Rico Teachers' Fund" that raised money for a nursing school.
During her early visits to Puerto Rico Alice became interested in the early colonization of the new world, especially Columbus' first voyage. In 1911, she traveled to Spain where she spent most of the rest of her life researching in Spanish archives, most notably the Archivo de Simancas. In July 1919 she published a story in the Atlantic Monthly entitled "The Adventure of the Missing Fortnight" that described some of her experiences researching in Spain.
During World War I Alice worked as a volunteer in the espionage office of the United States embassy in Spain and led an effort to send female clerical workers to the embassy to help with war work. She returned to the Chicago in 1918 to teach navigation to naval officer candidates at the University of Chicago Ensign School at the Municipal Pier. During this time she began research for on her essay on Great Circle Sailing, a navigational technique that calculates points along a great circle route.
In 1926 Alice returned to Spain to continue her research on Columbus and became involved in public education measures and the establishment of local schools in Simancas. The outbreak of the Spanish Civil War in 1936 forced her to return to Boston but after the war she returned to Spain. She lived the remainder of her life in Simancas.1