M, b. say 1816, d. 20 February 1820
Pedigree
John Grieve was born say 1816. He was the son of George Grieve and Minto Bell.1 John Grieve died on 20 February 1820 in Invercashley (Invercassley), Sutherland, apparently of exposure. According to the account of his death written by his mother to her sister Isabella, John had wandered out of the dining-room at one o'clock on the Sabbath day and followed either some young horses, or some young friends. The day being extremely misty he got lost, he was missed at about three o'clock and a large search was mounted by the neighbours, between 40 and 100 taking part over the two days. It was not until Tuesday that John's body was found "as if he had laid down to sleep in a little hollow on top of a hill". There had been a hard frost at night.2

F, b. 3 November 1813
Pedigree
Margaret Grieve was christened on 3 November 1813 at Hawick, Roxburghshire.1 She was the daughter of Walter J. Grieve and Christian Elliot.1

F, b. 9 April 1874
Pedigree
Markie E. Grieve was born on 9 April 1874 in Ontario.1 She was the daughter of George Grieve and Mary Rachel Jenkins.1 Markie E. Grieve married George Edward Huff, son of Hiram Wesley Huff and Nancy Wales, on 30 June 1900 in Belleville, Hastings County, Ontario,2,3 where her name is transcribed as Minnie Grieve and she appears to have used this name subsequently.2

F, b. 16 August 1816
Pedigree
Mary Christian Grieve was christened on 16 August 1816 at Hawick, Roxburghshire.1 She was the daughter of Walter J. Grieve and Christian Elliot.1

F, b. 7 November 1887
Pedigree
Mary P. Grieve was born on 7 November 1887 in Ontario.1 She was the daughter of George Grieve and Mary Rachel Jenkins.1

F, b. 6 August 1850, d. 28 January 1907
Pedigree
Minto Grieve was born on 6 August 1850 in Grieve's Corners, North Fredericksburg Township, Ontario, Canada. She was the daughter of William Bell Grieve and Elizabeth Fairbairn. Minto Grieve married William French, son of Thomas French and Agnes Dunwoody, on 31 December 1879 in North Fredericksburgh, Ontario.1 Minto Grieve died on 28 January 1907 in Ontario, Canada, at the age of 56. She was buried in Camden 5th Con. Presbyterian Cemetery.

M, b. 5 June 1818
Pedigree
Robert Grieve was christened on 5 June 1818 at Hawick, Roxburghshire.1 He was the son of Walter J. Grieve and Christian Elliot.1

M, b. 20 October 1824
Pedigree
William Grieve was christened on 20 October 1824 at Hawick, Roxburghshire.1 He was the son of Walter J. Grieve and Christian Elliot.1 A William Grieve emigrated in 1871 to Québec he was possibly a widower as he is listed as single together with the following members of his family on the passenger list; William aged 17, Janet 15, David 7, Ann 6, Jane 3.2 He married Margaret Jane Anderson, daughter of James Anderson and Jane Stewart, on 8 January 1878 in Owen Sound, Ontario.3

M, b. 29 March 1818, d. 22 September 1885
Pedigree
William Bell Grieve was born on 29 March 1818 in Creich, Sutherland.1 He was the son of George Grieve and Minto Bell.1 William Bell Grieve married Elizabeth Fairbairn, daughter of Robert Fairbairn, on 1 July 1842 in Canada.2 William Bell Grieve and Elizabeth Fairbairn appear on the census of 1851 at Richmond, Lennox County, Canada West [Ontario], The family are farmers and are Presbyterians. Living with them are Robert Fairburn, 65, Robert Fairburn, 22 and Esther Fairbur, 22, all born in Scotland; Robert Fairburn, aged 11, born in the United States and Archibald Fairburn, aged 9, born in Ontario.3 William Bell Grieve appears on the census of 1881 at Napanee Town, Lennox, Ontario, where he is described as a hotel keeper and a Presbyterian. He is listed on his own, which might just suggest that the hotel was not a resounding success.4 He died on 22 September 1885 in Napanee, Lennox, Ontario, Canada, at the age of 67.5 Note: Lillie Bell GRIEVE, died 24 March 1885 at age 3 yrs, 3 month, 23 days, of scarlet fever, at Napanee, Informant was William GRIEVE, hotel keeper.6

M, b. 6 May 1870
Pedigree
William Bell Grieve was born on 6 May 1870 in Ontario.1 He was the son of George Grieve and Mary Rachel Jenkins.1 William Bell Grieve married Annie Maud Hawley, daughter of William Hawley and Margaret S. Snider, on 25 October 1905 in Napanee he is a book keeper of Richmond, Napanee and she is of Ernestown, Napanee.2

F, b. 3 May 1820
Pedigree
Wilmina Grieve was christened on 3 May 1820 at Hawick, Roxburghshire.1 She was the daughter of Walter J. Grieve and Christian Elliot.1

Julia Griffin was born in 1869.3 She married Frank Lewis Sewall, son of Edward Sewall and Sarah Elizabeth Swanton, on 26 March 1907 in Los Angeles.4 In 31 October 1937, the address of Julia Griffin was 277 Park Avenue, New York, New York.5 She died in 19633 and is buried in Oak Grove Cemetery, Bath, Sagadahoc County, Maine.3 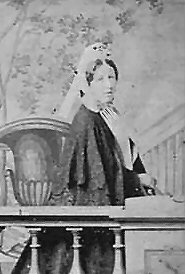