Child of Henry Corbin of Worcester

Rev. Edwin Joseph Corlett B.A. was born in 1868 in Bootle, Lancashire.2 He was the son of Dr. Joseph Benson Corlett and Eliza Collinson1,3 and was baptised on 19 November 1868 at St. John's, Bootle.4 Rev. Edwin Joseph Corlett B.A. married Henrietta Maud Innes Halliday, daughter of George Edmund Halliday and Henrietta Elizabeth Story Sewell, on 19 October 1897 in St. Stephen's, Lansdowne, Bath, Somerset.1 Rev. Edwin Joseph Corlett B.A. died on 10 March 1927 in The Rectory, Clatworthy, Somerset.5
He was a graduate of Trinity College, Dublin; he was ordained in 1891 to the curacy of St. John's, Portsea, and afterwards held curacies at St. Mewan (Cornwall). Bath. Lyonshall (Herefordshire), and Burnham, and was presented to the rectory of Clatworthy by the Hon. Mrs. Trollope in 1901. During the war he served as an Army chaplain.

Jolyne May Cornes was born on 22 June 1934 in Los Angeles, California.2,3 She was the daughter of George Henry Cornes and Joanna Ruth Sullivan.4 Jolyne May Cornes married Sewell Vincent Sample, son of George W. Sample Jr. and Harriette Josephine Sewell, on 19 January 1963 in Phoenix, Arizona.3 Jolyne May Cornes died on 26 December 2001 in Buchanan, Michigan, at the age of 67.2,3

Children of Jolyne May Cornes 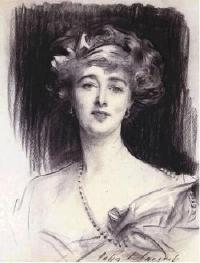 Regina Nazzarena Corsi was born on 27 January 1920 in Bradford, Pennsylvania.1 She married Dr. Kenneth Wilkins Sewall, son of Samuel Mark Sewall and Adelaide E. Wilkins, on 24 December 1945 in Maine.2 Regina Nazzarena Corsi died on 28 February 2013 in Waterville, Maine, at the age of 931 and is buried in Saint Francis Catholic Cemetery, Waterville, Kennebec County, Maine.3
WATERVILLE - Regina Nazzarena Sewall, 93, died Thursday, Feb. 28, 2013, at her residence.
She was born Jan. 27, 1920 in Bradford, Pa., the daughter of Teresa and Augusto Corsi.
She attended St. Bernard's Elementary and High schools. After graduation, she went on to the Saint Francis School of Nursing in Pittsburgh, Pa. She received her R.N. in October 1940 and was employed by the hospital. In 1943, she entered the U.S. Navy Nurse Corps as an ensign and served at the Philadelphia Naval Hospital until July 1944. She was then transferred to the San Leandro Naval Hospital in California, where she met Dr. Kenneth Sewall whom she married in December 1945. In March 1945 she graduated from the School for Air Evacuations at the U.S. Naval Air Station in Alameda, Calif. As a flight nurse, she attended casualties to the war in the Pacific as they were flown back from forward areas.
After peace was declared, she joined a team of active service people promoting the sale of U.S. Bonds in the Pittsburgh area. She was discharged from the service March 1946 with the rank of lieutenant junior grade.
Arriving in Waterville, she helped her husband in the first months of his practice and did the same when he became semi-retired for a four-year period.
She was a member of the Corpus Christi Parish, served on the Mansfield Clinic Board as secretary, a member of the Hospital Auxiliary, a guild member of the Historical Society of Early America, a member of the Samaritan Department of the Waterville Woman's Club, a past longtime member of the Waterville Country Club, a member of the Waterville Historical Society and a member of St. Francis Medical Center School of Nursing Alumni Association.
She had many interests, never at a loss for something to do. Most of all, she loved the time spent with family and close friends.
She was predeceased by her husband, Dr. Kenneth Sewall; and a daughter, Nancy.
She is survived by her three sons, Richard, and wife Gwyn, Peter and companion Lynette and Robert and wife Mia; her stepson, Jay; four granddaughters; two grandsons; one great-granddaughter; and two great-grandsons. Published in Central Maine on March 2, 2013.1